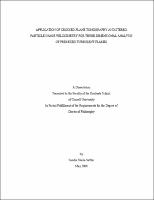 Crossed-Plane Laser Tomography (CPLT) and similar laser imaging methods have been used to measure instantaneous flamelet surface normal vectors in premixed turbulent flames to study the wrinkling of flamelet surfaces and the internal structure of the flamelet. CPLT was applied to measure flamelet orientations of premixed turbulent V-flames with increasing downstream distance from the stabilizing rod. Also, a combined CPLT and Stereo Particle Image Velocimetry (SPIV) technique was developed to measure flamelet orientation statistics, three dimensional reactant velocities, and flamelet displacement speeds in a turbulent V-flame. This technique was also used to measure in-plane flamelet curvature in laboratory V-flames. The distribution of flamelet orientations is found to have a simple universal form depending on a single parameter, ?, for all flames studied to date. ? and AT/A, the mean flamelet area increase due to turbulence, grow linearly with distance from the stabilizer. The observed growth rates in ? and AT/A vary considerably from flame condition to flame condition, and the differences cannot be explained solely by changes in u?/SLo, the ratio of the turbulence intensity to the unstretched laminar flame speed. Combined CPLT and SPIV are applied to measure three-dimensional flamelet orientation, reactant velocity, and flamelet displacement data in premixed turbulent flames. Three-dimensional flamelet orientation information is calculated from two simultaneous, orthogonal imaging measurements. Using SPIV, three-dimensional seed particle velocity measurements are obtained using two cameras. Each camera records an image pair separated by a short time interval and views the same region of the flame from a different perspective. Based on these different views of particle displacements corrected for thermophoretic effects, all three components of reactant velocity are found. The combined CPLT and SPIV technique measured instantaneous, three-dimensional flamelet orientation, flamelet surface curvature and the flamelet displacement speed, defined as the component of the relative velocity between the reactants and the flame surface that is normal to the surface. Displacement speed data showed both a broad distribution of values and a significant probability of negative values. The breadth of the distribution and the presence of negative displacement speeds are attributed to high values of curvature and extensive tangential strain.