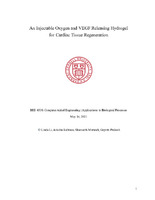 The purpose of this study was to determine the design requirements of an injectable fibrin hydrogel as a viable tool in delivering sufficient oxygen (O2) and vascular endothelial growth factor (VEGF) to hypoxic tissue to prevent scar tissue formation and simultaneously regenerate cardiac tissue. This study modeled changes in hydrogel size, solute concentration, and tissue damage to maximize delivery of oxygen and VEGF through an infarcted tissue region of 1.50 cm by 3.50 cm. Using COMSOL software, a 2D model of the injected hydrogel was generated to show oxygen and VEGF concentration as a function of time and space while the hydrogel deswelled following pseudo-first order kinetics. To determine the minimum effective amount of VEGF and oxygen needed in the hydrogel to regenerate wounded cardiac tissue, different solute concentrations were tested. The hydrogel loading conditions that gave the highest average concentration over 24 hours were selected. Using this method, the hydrogel was loaded with ml/m3 O2 and 0.8 ml/m3 8 × 10 VEGF, and the 5 therapeutic concentrations were reached at 22 hours for O2 ( ml O2 /m3 2 × 10 blood) and 24 −5 hours for VEGF (0.00137 ml VEGF/m3 ). Plots of concentration vs. position were made at 4 points in time to visualize the effective diffusion distance of the hydrogel’s contents and time required for delivery. VEGF diffusion had a radially symmetric distribution, while O2 had an asymmetric diffusion pattern due to oxygen provided by the bloodstream at the inner surface of the ventricle. From the asymmetric diffusion distribution, the location of optimal injection in the myocardial wall was concluded to be ⅓ of the distance from the heart surface to the ventricle. A sensitivity analysis was also done for all the parameters, and the final concentration of oxygen and VEGF in the damaged tissue was found to be most sensitive to hydrogel radius, which impacted the design recommendations. Determination of the proper concentration of dissolved substituents, hydrogel size, and diffusion time will assist surgeons, bioengineers, and material scientists in designing a viable injectable hydrogel.