The Roles of Allelopathy, Morphology and Genetic Diversity in the Invasion of Swallow-wort Species in New York State 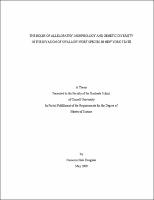 Vincetoxicum rossicum (pale swallow-wort, PSW) and V. nigrum (black swallow-wort, BSW) are perennial herbaceous vines native to Europe that have become invasive throughout New York, neighboring regions of Canada, and the northeastern US. Introduced over a century ago, the two species have spread rapidly in recent decades. Established swallow-wort plants, with root-to-shoot biomass ratios of 6:1 and the ability to produce thousands of seedlings each season, are very difficult to control effectively using conventional chemical or cultural methods. Furthermore, swallow-worts are adept at modifying invaded habitats, favorably altering fungal mycorrhizal communities and displacing endemic flora and fauna. Compared with other serious invasive plant species, relatively little is known about the biological and ecological attributes that allow swallow-worts to be successful invaders. The research presented in this thesis seeks to address several important questions related to their invasiveness, namely their allelopathic potential, and the magnitude of genetic and morphological variation of populations found in several regions of New York differing in soil type and climate. There have been reports in the literature indicating that these two swallow-worts are allelopathic and subsequently better able to out-compete and displace native flora. In this study, competition assays in agar media using seedlings demonstrated that SW root exudates - and particularly those of PSW - can cause significant root length reductions (e.g. 40% for butterfly milkweed) and germination rate decreases (e.g. 30% for lettuce) of indicator species. Bioassays using dried, field-collected tissue debris in a soil:sand growing media demonstrated that leachates from SW leaf tissues caused a negative effect on the growth of indicator plants: 40% and 50% reductions from BSW and PSW tissues, respectively. There was a significant dose response, with 1 g of tissues resulting in significantly (P < 0.05) greater negative effects than 0.5 g of tissue. Furthermore, tissue leachates of the two species were self-inhibitory. BSW tissues decreased root growth (50%) of PSW indicators, but PSW tissues stimulated both root growth (38%) and germination (43%) of BSW indicator plants. A stimulation rather than inhibition of seedling growth was also observed for one of seven indicators (lettuce) in the agar root exudates experiment. The allelopathic capacity of the swallow-wort species was not significantly greater than that of a related non-invasive native species (common milkweed). In addition to characterizing genetic diversity levels in introduced swallow-wort populations, we sought to identify whether genotype or environment (i.e. soil and climate) best explained the morphological variations observed in swallow-wort populations in New York. We found that the two species are monophyletic, but that intra-specific genetic similarity was high (mean = 0.79; Nei & Li's coefficient of genetic similarity). Genetic diversity did not explain morphological patterns in swallow-wort populations. Rather, adaptive morphological traits of invasive swallow-worts were correlated with soil pH (plant height: B1 = -0.67, r^2 = 0.5, P < 0.05) and precipitation levels (plant height: B1 = 0.51, r^2 = 0.52, P < 0.0037; leaf shape: B1 = 0.55, r^2 = 0.52, P < 0.05). Also, in comparison with sites invaded by BSW, sites with PSW infestations were characterized by significantly (P < 0.05) higher soil pH (13%), Ca (475%), and Al (369%) levels. The substantial inhibitory effects of swallow-wort tissue leachates are likely to have profound implications for management and restoration of invaded sites. However, our results suggest allelopathy is not a dominant factor explaining the invasiveness of the two species. Given that intra-specific genetic diversity of swallow-wort populations was lower than expected, the role of plant acclimation to environment in explaining swallow-wort invasion requires further study.