Development of Physiologically Realistic In Vitro Models of the Gastrointestinal Tract 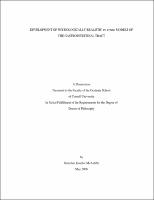 The gastrointestinal (GI) tract is the largest surface exposed to the environment in the human body. Intestinal absorption is the entry route for most essential nutrients and the preferred method for pharmaceutical administration. Understanding how compounds interact with and are absorbed through the small intestinal epithelium, and how they go on to affect the rest of the body, is crucial for nutritional and toxicological evaluation. Our group has developed an in vitro cell culture model of the gastrointestinal tract that includes digestion and physiologically realistic cell populations with a mucus layer. The applications of this model include predicting iron bioavailability, studying the effects of oral exposure to nanoparticles, and measuring the metabolism and toxicity of ingested chemicals or drugs. Co-cultures of absorptive and mucus-producing cells were incorporated into an existing in vitro digestion/cell culture model used to assess iron bioavailability. At physiologically relevant ratios of Caco-2 absorptive cells to HT29-MTX mucus-producing cells, a mucus layer completely covered the cell monolayer and the in vitro digestion model was nearly as responsive to changes in sample iron bioavailability as pure Caco-2 cultures. The existing in vitro digestion/Caco-2 cell culture model correlates well with human iron bioavailability studies, but, as mucus appears to play a role in iron absorption, the addition of a physiologically realistic mucus layer and goblet-type cells to this model may give more accurate iron bioavailability predictions. An in vitro cell culture model of the intestinal epithelium with absorptive, goblet, and M cells was used to study the effects of nanoparticle exposure on iron uptake and transport. Polystyrene 50 nm and 200 nm particles were found to interfere with cellular iron uptake and transport, indicating that oral exposure to nanoparticles could potentially have an effect on the normal physiological functions of intestinal epithelial cells. These preliminary results suggest that nanoparticle size, concentration, and charge can influence the uptake and transport of iron. Microscale cell culture analogs (microCCAs) are used to study the metabolism and toxicity of a chemical or drug. These in vitro devices are physical replicas of physiologically based pharmacokinetic models that combine microfabrication and cell culture. A GI tract microCCA, together with a multi-chamber silicon chip microCCA, has been used to recreate the toxic effects of acetaminophen. Proof of concept experiments show that acetaminophen passes through the in vitro intestinal epithelium and is metabolized by liver cells, resulting in liver cell toxicity.