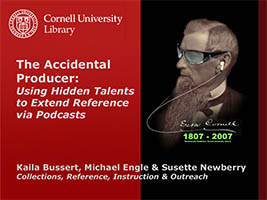 The Accidental Producer: Using Hidden Talents to Extend Reference via Podcasts In June 2007, librarians from Cornell University's social sciences and humanities libraries launched a program to promote reference and other library services. They turned to podcasting, a relatively new technology, as a way to distribute content over the Internet for use on computers and mobile devices. The process involves writing scripts, recording and editing audio, adding images and music, all skills honed for decades by radio and film producers, but not taught in library school. Cornell podcasters have developed several podcast series, each differing in its style, length and audience. The first series, Uris Historical Tours, comprises six audio walking tours of Cornell's first library. Designed as a form of cultural programming and outreach to alumni and friends, the audio walking tours have become popular with patrons on- and off-site. The second series, orientation walking tours, serves new students and faculty members by exposing collections and expanding reference services. For both walking tours, podcasts were made available online, using a number of free commercial podcasting distribution venues, and in person via pre-loaded, circulating MP3 players. While the historical tours were well received, the orientation tours garnered little use. After a period of assessment, the team concluded that their orientation tours were too long, the style too highbrow, and that as audio tours only, they had limited appeal for a multi-media savvy audience. With these lessons in mind, podcasters developed Research Minutes, a series for undergraduate students covering library research concepts. The series transforms a web-based research guide, Research Strategy: A Tutorial, into short, 90-second podcasts with music and images. Simulating the reference desk interview, each segment brings together a librarian and a student to discuss common research issues, such as identifying scholarly articles and substantive news articles (two segments completed thus far). The intention is to distribute and promote these podcasts to students via the library website, the university's course management system, and commercial sites like YouTube. After evaluating the effectiveness of the podcasts, further segments will be developed. The podcast creation process illustrates new ways that colleagues collaborate. Librarians learned new technologies while also bringing to the table their otherwise "extracurricular" creative talents. Several reference colleagues, for example, had relevant experience: a former children's librarian who specialized in reading aloud, three college radio DJs, and a poet. These and other previously hidden talents (such as a musical ear, especially helpful for sound editing) contributed substantively to the podcasting program. Establishing a podcasting program has involved a great deal of assessment and imagination. Varying format to meet audience needs, Cornell podcasters have learned how to incorporate music, images, and video, concluding that script writing, production value, and promotion are the keys to success in effectively reaching the library's primary audiences. Cornell librarians are learning to convey their message via a new medium, using techniques of the radio and movie trade and in the process, becoming producers almost by accident.